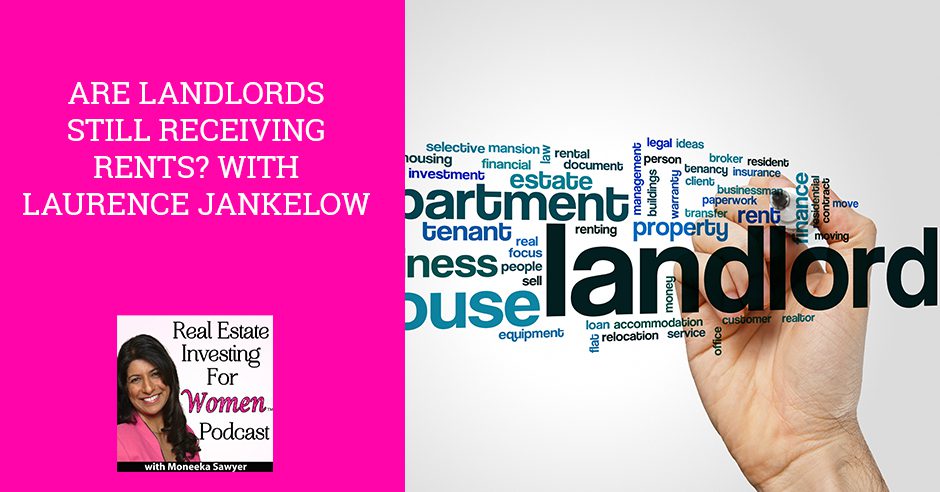 How has the pandemic affected you? In this episode, Laurence Jankelow, co-founder of Avail, joins Moneeka Sawyer to give an update on the status of do-it-yourself landlords, given the situation of COVID-19, and if they are still receiving rents. Laurence lays down the analytics on over 600,000 properties across the country during the pandemic. Contrary to what the media was suggesting, Laurence shares a positive analysis of the rate that rents are being paid by tenants. Laurence and Moneeka then talk about what to expect in the near future and dealing with late rents versus unpaid rents.

Listen to the podcast here:

Welcome to the show Laurence Jankelow. He is the Cofounder of Avail, an all-in-one software solution designed for do-it-yourself landlords that is used by more than 600,000 landlords and tenants across the United States. Prior to launching Avail, Laurence spent seven years in data analytics, first as a consultant at Protiviti Chicago and at Goldman Sachs. He’s originally from South Africa. He has a heartbreaking spirit and together with his Cofounder Ryan Coon, they developed the idea for their company on a napkin that now solves the needs of thousands of landlords. He is also a long-term real estate investor with a passion for three-unit multifamily properties. Laurence, how are you?

I’m doing well. How are you?

I’m good. Since he manages 600 doors, not 600,000 doors, not manages, but because they’re in his system, he has a good feel for what’s going on with rents given the current situation with COVID and we’ve also had protests and some other things going on. He’s got some great analytics that I wanted to share with you. Laurence, why don’t you go ahead and take it away. Give us an update on what’s going on in the market.

Avail is an online platform for landlords and tenants to manage their properties. One of the things that we do is allow tenants to pay their rent online. Because of that, we see real-time data of what’s happening with rent for 400,000 tenants across the United States. We’re in something like 18,000 zip codes, very representative of the United States. In March 2020 when the pandemic was catching ablaze in the United States, there’s a lot of fear happening around what was going to happen with unemployment, job security, rent payments and the whole economy.

Even before we had real-time data, we had sent out a survey to our landlords and tenants. We had 10,000 tenants respond. The survey asks things like, “It’s the middle of March 2020. What are you planning on doing about your April 2020 rent? How has the escalating pandemic affected you? Have you maintained a job? Have you lost your job?” In the middle of March 2020, we were seeing some shocking results coming out of that survey where something like 35% of tenants had said they’d already lost their jobs due to the pandemic. That was within the first 1 or 2 weeks of things being shut down. We went on and followed up with them and asked them, “Are you planning on paying rent for April 1, 2020?” Fifty percent said although they want to pay their rent, they’re likely going to be unable to.

People are paying on time, and all this doom and gloom that's being propagated by the media isn't necessarily accurate. Click To Tweet

That’s whether they’d lost their jobs or unable to get a line of credit for it. They themselves were predicting they’d be unable to pay their rent upcoming. We start off with that survey and that fed this fear for us and our landlords. We started communicating that out. That picked up some news media for us. While ahead of April 1, 2020, we were starting to do this media circuit and it wasn’t just us. We were seeing a lot of media trying to suggest the horrific is going to happen, like renters aren’t going to pay rent and that’s going to trickle up to landlords not paying mortgages and that’s going to trickle up to defaults.

I’m proud to say the real data that came on April 1, 2020, was not what the survey had necessarily indicated. We saw that, although it was worse than in prior months, it was nowhere near the doom and gloom that people had predicted. We saw that in April 2020 rents, 90% were paid in full. It’s higher than average for the amount paid late by a little bit, but still generally on par with being paid on time. We looked at that and we saw the same thing happened in May 2020, where a lot more people paid on time than everybody thought they weren’t. Part of what we wanted to do was send a message of like, “People are paying on time. All of the sphere, doom and gloom, that’s being propagated by the media isn’t necessarily accurate.”

If you’re a landlord in that time period, you were probably worried and probably even now see that most of your tenants didn’t pay on time. A lot of the things that the government did probably helped. It’s hard to tell. For April 2020, we saw that rent was later than normal. What happened with April 2020 was stimulus checks went out and then tenants were able to use that to catch up and pay the rent. We saw rent being paid in full, maybe a little late. We saw by the end of April 2020 that the initiatives in our employment had kicked in and people were no longer waiting as long in line as they were. We saw that May 2020 was similar, higher than average amount being late, but still paid on time.

June 2020 looks so far to be much the same. I’m happy to report that our numbers are showing that near 90% of rent is being paid on time or in full but a little bit late. Eighteen percent paid late roughly, but at least being paid so that’s great. It does beg some questions of what will happen because I know some of the stimulus stuff is over, especially around unemployment. That’s only going through July 31, 2020. Is it time to get worried again for August 1, 2020 and September 1, 2020 rent? I don’t know. There’s a dialogue and discussion to be had there.

What is that dialogue going to look like do you think?

I think it’s tough. I know there are a lot of talks about additional stimulus happening. I know that in various states, the economies are starting to reopen and people who were on furloughs or who lost their jobs are being brought back in. There’s somewhat of a race to rebound those positions before the stimulus runs out. I don’t know which is going to win. I’ve had a feeling seeing how behaviors have trended that if the race is lost and people aren’t brought back into work as quickly, what it ends up doing is it pushes rent to be late rather than not paid from what we see. Not as much fear to be had, but maybe more encouraging for landlords to start thinking about, “I am going to get this rent. I can be patient and work with my tenants and keep that communication open.” It’s not that they’re going to not pay, it might be later and then they don’t have to start doing war of the worlds as soon as they thought. 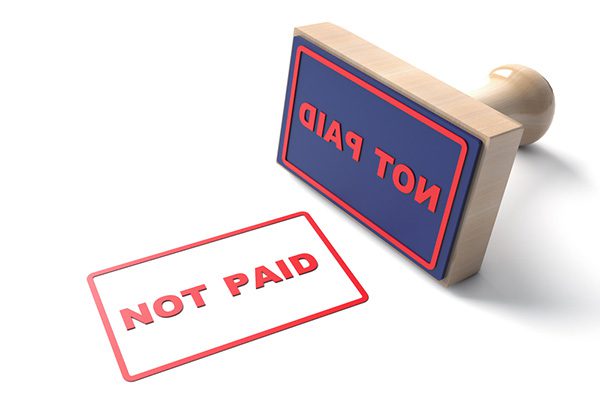 Are Landlords Receiving Rents: If the race is lost and people aren’t brought back into work as quickly, what it ends up doing is it pushes rent to be late rather than not paid.

If people are paying rent and that’s the expectation, but they’re paying it a little bit late, if you don’t get all your checks on the first, don’t start freaking out. Don’t start going into stress and don’t start attacking your tenants. You don’t want to start the, “Three days or quit,” type of posting letters and threatening evictions. This is the time to be patient and compassionate. You probably will get paid. Understand and remember that your tenants are your business partners. We need to be compassionate for them too. I love the signs that they want to pay, to keep their homes, to be in partnership with their landlords. That’s good news. That’s what I’ve been seeing in my own business. That definitely confirms all of that. That was a valuable information. It will lower the stress of my readers.

It’s a short message to deliver that we don’t need to be freaking out as much. I wish the media would report on the good or truthful side, not to be anti-media. We can take a step back, maybe relax a little bit. As long as we’re keeping in contact and communication with our tenants, renters, and setting the expectation that it’s okay to be a little late. We understand. You may still want to waive late fees from humanitarian efforts. I’m proud to say that the data is showing people are paying. The survey had indicated that people wanted to pay if they were able to.

Thank you, Laurence. This has been a quick show. Like Laurence says, the media is all about the hype and they don’t often report the good news. I’m loving that Laurence came on and shared the good news with us. I look forward to seeing you guys on the next show. Thank you for joining Laurence and I. Always remember, goals without action are just dreams. Get out there, take action and create the life your heart deeply desires. I’ll see you soon.

Moneeka Sawyer is often described as one of the most blissful people you will ever meet.   She has been investing in Real Estate for over 20 years, so has been through all the different cycles of the market.  Still, she has turned $10,000 into over $5,000,000, working only 5-10 hours per MONTH with very little stress.

While building her multi-million dollar business, she has traveled to over 55 countries, dances every single day, supports causes that are important to her, and spends lots of time with her husband of over 20 years.

She is the international best-selling author of the multiple award-winning books “Choose Bliss: The Power and Practice of Joy and Contentment” and “Real Estate Investing for Women: Expert Conversations to Increase Wealth and Happiness the Blissful Way.”

Moneeka has been featured on stages including Carnegie Hall and Nasdaq, radio, podcasts such as Achieve Your Goals with Hal Elrod,  and TV stations including ABC, CBS, FOX, and the CW, impacting over 150 million people.

Moneeka Sawyer is often described as one of the most blissful people you will ever meet.   She has been investing in Real Estate for over 20 years, so has been through all the different cycles of the market.  Still, she has turned $10,000 into over $5,000,000, working only 5-10 hours per MONTH with very little stress. While building her multi-million dollar business, she has traveled to over 55 countries, dances every single day, supports causes that are important to her, and spends lots of time with her husband of over 20 years. She is the international best-selling author of the multiple award-winning books "Choose Bliss: The Power and Practice of Joy and Contentment" and “Real Estate Investing for Women: Expert Conversations to Increase Wealth and Happiness the Blissful Way.” Moneeka has been featured on stages including Carnegie Hall and Nasdaq, radio, podcasts such as Achieve Your Goals with Hal Elrod,  and TV stations including ABC, CBS, FOX, and the CW, impacting over 150 million people.